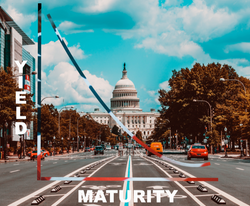 What is an inverted Yield Curve?

There was a lot of talk this week about an inverted yield curve and consequently a lot of hand wringing and anxiety about what that means for the economy and our investments. You don’t need me to tell you there is a lot going on in the world for investors to worry about. But what is this yield curve and how does it invert? And why should we care?

A yield curve is a measure, a plot line, of the interest rate of the differing maturities on a particular bond issue. Typically, we keep an eye on the US Treasury 10-year minus 2-year yields. Remember, as a new issue, a treasury bond pays a stated rate of interest until it matures. Maturities start really short, just a few months, and go out all the way to 30 years. In normal instances, the longer the maturity the higher the rate. Once a bond is issued and trading starts in secondary markets, pricing on these is adjusted to reflect current yields.

This chart shows the curve of 10-year treasuries minus 2-year yields. This series goes back to 1976. You can see the points where the curve inverted when it dips below the black line. The gray horizontal bars are recessions. Every recession in this series was preceded by an inverted yield curve.

Obviously, that gets investor’s attention.

But does this truly predict a recession? According to economists at the Federal Reserve, a higher short-term rate vs a longer-term rate, means the market expects higher growth in the short-term. In other words, a deceleration.

Everything is relative however. So, if we are in a period of very high growth, which the US economy has been for the last 18 months, it would make sense that there would be expectations of slowing growth. That doesn’t necessarily mean a contraction or negative GDP.

If you look at the period from 1995 to 1998, the curve flattened and then dipped negative briefly, much like we saw last week. There was no ensuing recession then. Of course, the Iraq war came along in 2001 and that recession was preceded by an inverted yield curve on the heels of the curve bouncing back. And the timing of recessions after yield curve inversions is pretty wide; in some cases as little as 6 months, in others more than 2 years.

So, in our current environment, we expect the Fed will be pressured to continue hiking interest rates to combat inflation. This keeps flattening pressure on the curve. The question becomes, will the market begin to anticipate higher growth rates on the horizon or continued deceleration. The yield curve may hold some clues.

Government bonds and Treasury bills are guaranteed by the US government as to the timely payment of principal and interest and, if held to maturity, offer a fixed rate of return and fixed principal value.